Reflections on the Appearance of VR 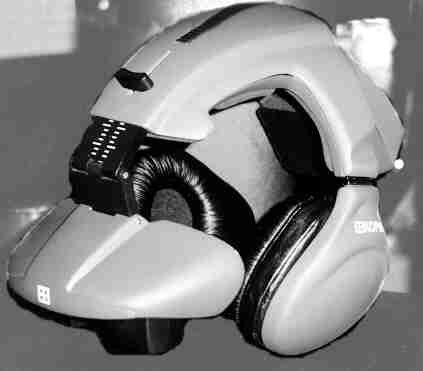 You couldn't miss virtual reality at SIGGRAPH this year. Fully a third of the exhibitors had products that were useful (or so they claimed) in the creation or display of interactive 3D graphics. Is was a significant increase from prior years.

On the other hand, VR was nearly invisible at SIGGRAPH.

By that I mean that if you define VR as requiring an HMD, you were out of luck. There were very few HMDs in evidence on the show floor.

There were plenty of VR experiences however. There was a hip new term, Experiential Computing, coined to put a new spin on VR. There was the Immersive Workbench. There were mini-CAVEs. There were big screen displays, and wrap-around displays. There was 3D sound, force feedback, 3D APIs galore. There was a flock of new 3D graphics accelerators, and there was a serious challenge to SGI's hegemony in 3D graphics.

Sure, there were a few HMDs. General Reality, n-Vision and Virtuality were showing their systems. Division, HP, SENSE8, SUN, and VREAM had a couple of HMDs each. But what a difference the past few years has made.

Two years ago, in our report on SIGGRAPH 94, we printed a chart showing the ubiquity and variety of HMDs on the floor (CEJ #22, Vol. 4, No. 4, July/August 1994). That year, excluding the EDGE exhibit (similar to this year's Digital Bayou), we counted 43 HMDs on the floor (14 models from 8 manufacturers). In 1994, SUN alone had 11 HMDs prominent in their exhibit. This year there were probably fewer than a dozen all together. What does that mean for VR?

It means that the gee-whiz, shock value of VR has dipped pretty low, for one thing. The hype-masters have moved on, the media glare is blinding someone else, VR is not on Everyman's lips anymore. (There is a positive side to this, though. Maybe we won't see Lawnmower Man III, the Idiocy Continues.) Some people will say VR has gone the way of AI: over-hyped, and then forgotten.

I don't think so.

VR is like AI in one way. Since its overexposure, AI has quietly become a part of our cars, our appliances, our phones, and a lot of our software. Maybe it isn't touted as AI, but we interact with it everyday, in the form of Setup Wizards, computerized thermostats, and plenty of applications. AI was integrated into dozens of functions. VR will be too, as it becomes an accepted component of many computer applications.

We saw the beginning of this at SIGGRAPH. VR was everywhere, being used, valued, and generally celebrated. I expect no less in future years.

But the question remains; where were the head-mounted displays? More to the point, where were the Forte, Kaiser Electro-Optic, VictorMaxx, and Virtual I/O booths? (Virtual Research has always engaged in underground marketing, supporting all the other exhibitors who use their equipment.) Is the HMD business in trouble?

There are certainly indications that it is. Forte has recently offered extended payment plans to its creditors. VictorMaxx has almost stopped marketing their system. Kaiser E-O has retrenched, trying to overcome manufacturing and QC problems. Even Virtual I/O shows signs of strain. These companies have something in common. They all tried to sell to a consumer (or amusement) market that no one could prove existed. (One wonders if they believed their own marketing hype a bit too much.) They have all (we hear reported) had significant returns from retailers. They all expected people to pay big bucks for a game peripheral.

However, other HMD makers, especially those who eschewed the speculative consumer market are going strong. Virtual Research, Virtuality, n-Vision, and General Reality all report strong sales, and are introducing new models. Among them, only Virtuality focuses on the entertainment market, and they are making a strong effort to enter the "professional" VR marketplace. All of these companies have reasonable business plans, with realistic expectations. They're all doing OK.

But none of them are doing great. In my opinion, the reason is obvious. On a dollar per pixel basis, HMDs cost way too much. Basically, this problem plagues the entire HMD business, from bottom to top.

How much does that pixel cost?

Let's look at the competition to HMDs. Basically, you start with the typical computer monitor. Assume that a 15" SVGA monitor is standard these days. These monitors are capable of 1280 x 1024 color pixels. More than 1.3 million pixels (436,906 color triads), at a typical retail cost of under $400 (in the USA). That works out to 3,277 pixels per dollar.

What is the cost per pixel for an equivalent HMD? The only commercially available system that approaches that resolution is the n-Vision Datavisor 1024. It has 1024 x 800 pixels per eye (819,200 pixels), or 273,066 color triads per eye. Let's be generous and double that number, since the Datavisor includes two displays (but no tracking system). So we get 1,638,340 pixels. The cost for a Datavisor is about $75,000. So in this HMD, we get 21.8 pixels for every dollar spent. That's about 150:1 ratio of pixels per dollar between our SVGA monitor and the hi-res HMD.

Perhaps that comparison isn't quite fair. Let's look at the most popular low-cost HMD, the Virtual I/O i-glasses. The I-glasses, without tracking, costs about $600. For that we get 138,000 pixels per eye (46,000 triads), or a total of 276,000 pixels. This is a much better cost per pixel than the Datavisor: an exciting 460 pixels per dollar. This is only seven times more expensive than the monitor. I think this is the real problem. To compare favorably to the monitor, the I-glasses should cost about $85. The Datavisor ought to set you back about $500. And believe me, at those prices, HMDs would be jumping off store shelves.

On one hand, this comparison is obviously absurd. HMDs use expensive components, and there is not yet any economy of scale to help reduce their unit costs. It is still very difficult to make the LCDs used in the I-glasses, and many HMDs, in quantity, which is one reason their cost is so high. (Reported to be 90% of the cost of the I-glasses.) The high-resolution, miniature CRTs that generate the images in the Datavisor cost even more.

However, HMDs are the limiting factor in immersive VR today. By next year at this time, almost anyone will be able to afford near-RealityEngine performance, and in a PC that can be used for many other tasks as well as VR. While the cost of computing power has fallen by more than two orders of magnitude, the cost of HMDs has down much less. While tracking systems have dropped in price, and increased their range and speed, HMDs have generally reduced their fields of view, and still provide myopic, low-contrast images.

Don't get me wrong. I'm emphatically NOT blaming the HMD manufacturers for these problems. I know most of them personally, and I know they would love to build $100-$500 HMDs. The bottleneck is the basic display technology itself. There are no low-cost, high-resolution displays, period. And until there are, HMDs will remain an unacceptably large part of the cost of VR.

The thrill is gone. People will not wait in line for hours to look at a grainy, low-quality image that makes their eyes cross. More importantly, the majority of corporate check writers will not pay for either low-cost, low-quality displays, or high-cost, high-res units. They can't justify the cost/benefit ratio in either case.

There is an obvious remedy to this situation. VR developers need to figure out how to make virtual worlds that contribute to business and science in such important ways that the end-users will DEMAND VR, and HMDs. We're talking applications; we're talking spending the time to show how immersion can help us do real work.

Will we see $100 HMDs at SIGGRAPH next year? I doubt it. But you can be sure that you'll see a lot of VR. Now if we could just get rid of DOOM...