A Conversation with zSpace’s Dave Chavez

Today I spoke with Dave Chavez, Chief Technology Officer of zSpace, about their 3D computers with built-in stereoscopic display systems. The systems are the zSpace Laptop, a powerful 15-inch laptop and a 24-inch standalone all-in-one system called the zSpace AIO PRO.  Both systems provide active 3D through the use of circular polarization and polarized glasses. Systems come with one pair of tracked glasses, which provides viewpoint control, and one pair without tracking, for a spectator.

zSpace has had rapid growth, and is in fact claiming 217% year-over-year sales increase from 2018 to 2019. They first expected to be hitting a commercial market, I was told by Dave, but they found instead a substantial educational market. Growth in the educational market itself is more than 30% per year. A school superintendent told Dave, “It’s my responsibility to get kids ready for the future. This is the future.” He put in a lab in his school with 10 systems, valued at about $50-$60,000. Dave said, “It’s a bit of a gamble putting the systems and schools.” However, he believes the early adopters see the value of providing 3D workstations to the kids. zSpace provides training for teachers and some content guides, which can be the basis for lesson plans. These guides are based are aligned with Common Core and National Science Foundation guidelines. 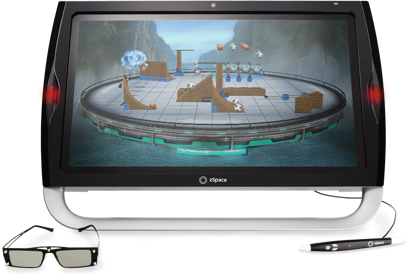 The displays are circularly polarized with a 120Hz refresh rate, and with the polarized glasses, provide stereoscopic imagery.  The glasses are passive, though the included stylus is powered through a lightweight cable. The system uses infrared LEDs for tracking, with beacons built into the bezels of the displays. The stylus incorporates inertial tracking through a gyroscopic system and several buttons for controlling activity in the software. The 15-inch laptop costs about $1300, though they are seldom sold individually, instead sold in bulk to schools and commercial purchasers. The price includes a stylus and two pairs of glasses.

zSpace has several dozen applications available, ranging from elementary school science through auto repair and into medical visualization and training. They see a large commercial market of coming on line, especially in healthcare. Dave told me that Stanford Hospital had used the system in the OR during a very complicated operation to separate conjoined twins.

Google is working with zSpace to provide a web interface based on OpenxR. A browser plug-in that works with Chrome is available now. Dave believes that web delivery of 3D content is key to zSpace’s growth.

zSpace is a little over 10 years old and has received the venture capital funding of a bit more than $80 million. They have more than 100 employees, and investing heavily in R&D.

That R&D includes looking at innovative form factors, designing a next-generation user interface, and looking at autostereoscopic displays. Autostereo displays aren’t good enough yet, Dave thinks. I agree with this assessment, but the fact that zSpace is looking at these systems implies that they are not wedded to their technology, but are instead seeing the opportunity in building a business in selling 3D visualization equipment, software and services to the educational and commercial marketplaces.

zSpace is based in Sunnyvale, California. Find more information at www.zspace.com.