We recently learned of a VR training project that strikes us as an excellent example of training for blue-collar workers in a task with important consequences. Developed by the US VR developer Inlusion, the system trains airport workers to correctly de-ice aircraft.

Aircraft de-icing is a critical aspect of winter operations in cold-weather climates. Ice adds weight to the aircraft, and can also affect the operations of flight controls, such as flaps, ailerons, elevators, and rudders, by freezing or jamming them. The added weight of ice and snow can cause the aircraft to be difficult to control and to use more fuel. Ice can also disrupt the airflow over the wings, reducing lift.

Obviously, none of these situations are acceptable. Therefore, de-icing fluid, similar to the antifreeze used in cars, is sprayed onto aircraft before they take off. The training is intended to instill good work practices in the person operating the sprayer. Using the optimal amount of de-icing fluid is important, as these solutions cost $20 per gallon or more, and a single commercial jet may require as much as 1,000 gallons of fluid. The fluid must be applied systematically, so that all controls are clear of ice and that ice and snow is removed from the fuselage and wings.

The aim of Inlusion’s project is to simulate aircraft de-icing procedures in virtual reality. Several aspects of the task are included in the simulation: liquid spraying, lifting platform control and communication among ground crew members.

The de-icing simulation has two modes. One is a training program with instructional prompts. The other mode is for skills testing. 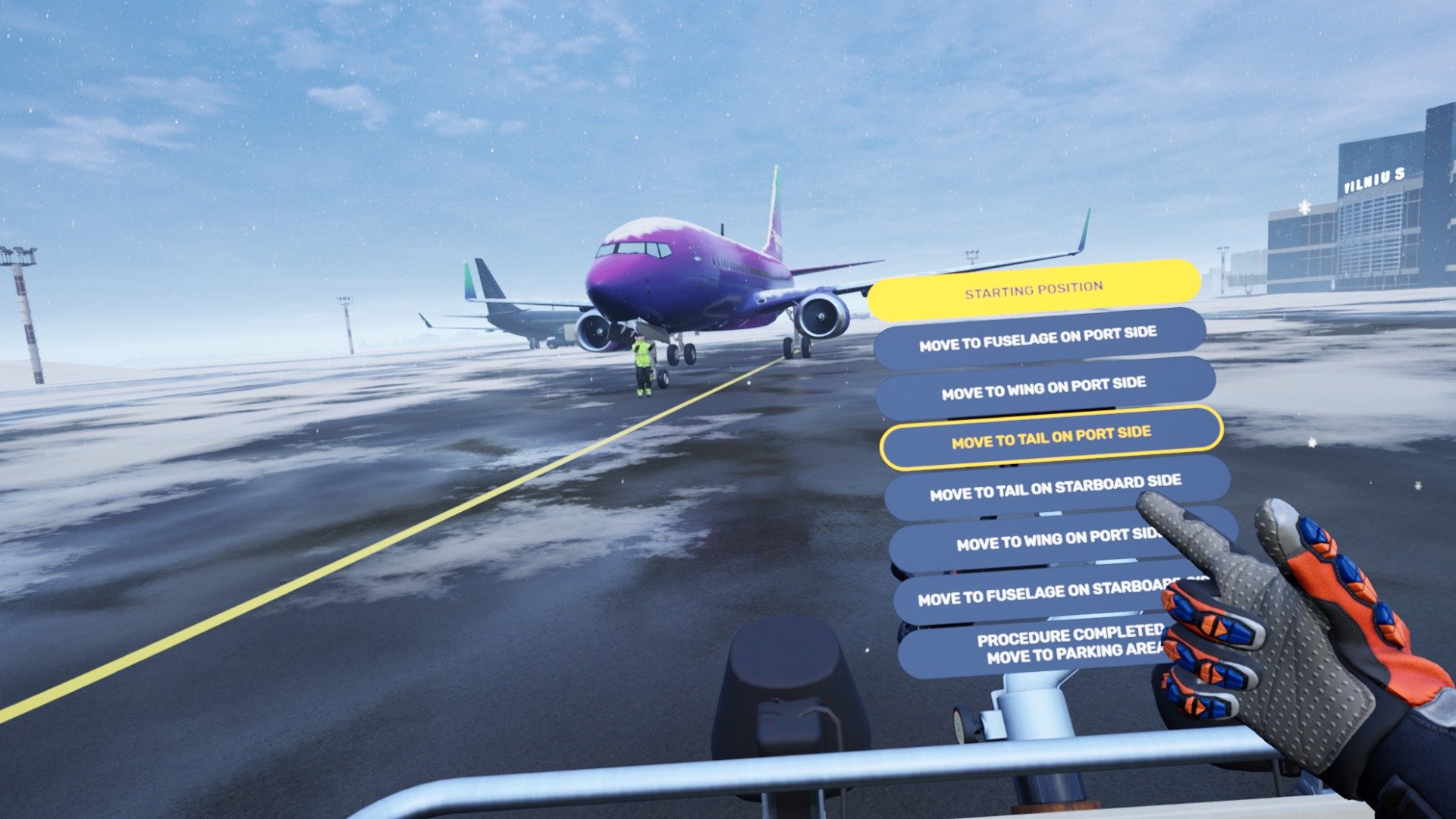 De-icing training in a virtual environment is faster and costs less than traditional methods. De-icing training is supervised by an instructor who has both theoretical and practical knowledge of the procedure. In the teaching mode, which takes place after classroom instruction, the trainee is guided through the procedure by a visual hint system. In the examination mode the visual hint system is absent, and the user must make his own decisions and act as he was trained. In the examination mode, errors are logged and the trainee is graded on performance.

In addition to the training and examination modes, the simulation has an instructor mode that allows the trainer to set up the exercise and oversee the trainee’s performance in real time. After the simulation is completed both the instructor and the sprayer can review the performance in a result table, where they see the amount of liquids and the places they were sprayed and review any errors. Examinations may be replayed from various points of view allowing the instructor to review the effort with the trainee and discuss errors and methods to improve performance.

Additional benefits of the project:

This VR training tool was developed to fill the gap between the theoretical and practical training of de-icing staff. Though not yet fielded, the system is expected to reduce training time for this procedure by as much as 50%. This will save instructors time, additional personnel involvement in training, and other resources required for training, including the approximately 1000 L of de-icing fluids used during each person’s training using traditional methods. which consists of 10-20 practical operations, and takes up to a week to complete.

See a video presentation of the De-icing Training Simulator here.

Inlusion Netforms is based in Chicago, IL, USA. They may be reached at +1-847-778-4647, by emailing leo@inlu.net, or by visiting inlusionreality.com.