Last week I had the opportunity to try a new virtual social networking platform, Arthur. This is the newest contender in a crowded field in which dozens of companies are vying for a prize that is, at best, loosely defined, and has no guarantee of being awarded anytime soon. First, in the spirit of full disclosure, let me say that I have been no fan of virtual meetings and social spaces. Since before Second Life, I have found these attempts at virtual social interaction lacking in most dimensions. It is only fair to say that I was a late-comer to the video conference space, too. In both cases, the early attempts to provide these services were awkward, technology limited, subject to frequent crashes, and often more trouble than they were worth.

But a pandemic changes how one views the world. I am now an enthusiastic Zoomer and participate in several sessions a week, both as host and as participant. The savings in time and effort to get to meetings that do not absolutely require personal presence is immense, and video meetings will certainly continue to be a strong business even after we are free of COVID. But of course, meeting in Zoom does not allow the serendipitous encounters that real conferences enable. Nor does Zoom make it easy to sneak out of a boring presentation unnoticed. So, I looked forward to my Arthur demo with as open a mind as I could muster.

There is a lot of potential in the VR/AR meeting concept. Most obvious, perhaps, is that the sharing of 3D models, such as medical imagery or design concepts is best done in an environment that enables viewing those objects in their full, three-dimensional glory. But most of the other reasons that people offer to rationalize xR meetings apply just as well to video meetings. Reduced travel expense and environmental impact? Check. Offer classes, presentations, or shows for large groups of people in diverse locations? Check. A sense of being in the same place? Check. Maintain focus while sharing a variety of digital assets? Check. Seem to be in another, even a fantastic place? Check. Appear to be really on top of things by using new technology? Check!

Arthur does a lot of things right, and many of them better than other social xR solutions I have tried. Its spatial audio is quite good, and important, because Arthur supports very large virtual spaces and in them sound, as in the real world, tells you where to look. The system facilitates group activities with whiteboards, virtual monitors, comprehensive file integration systems, presentation support, and in-world web browsers. The Arthur team told me that they placed an extremely high value on data security, which is why the system uses end-to-end encryption and other security measures. The service is powered by Amazon® AWS™ and the Arthur team tells me it can scale to meet any size environment or VR requirement.

Arthur’s controls are pretty good, though not entirely intuitive. My experience was with the Oculus Quest HMD and controllers, the only platform currently supported. Arthur uses all of the switches, triggers and buttons on the controllers, some with multi-button requirements that need two buttons to be pressed simultaneously. Remembering all of the options was a bit challenging. 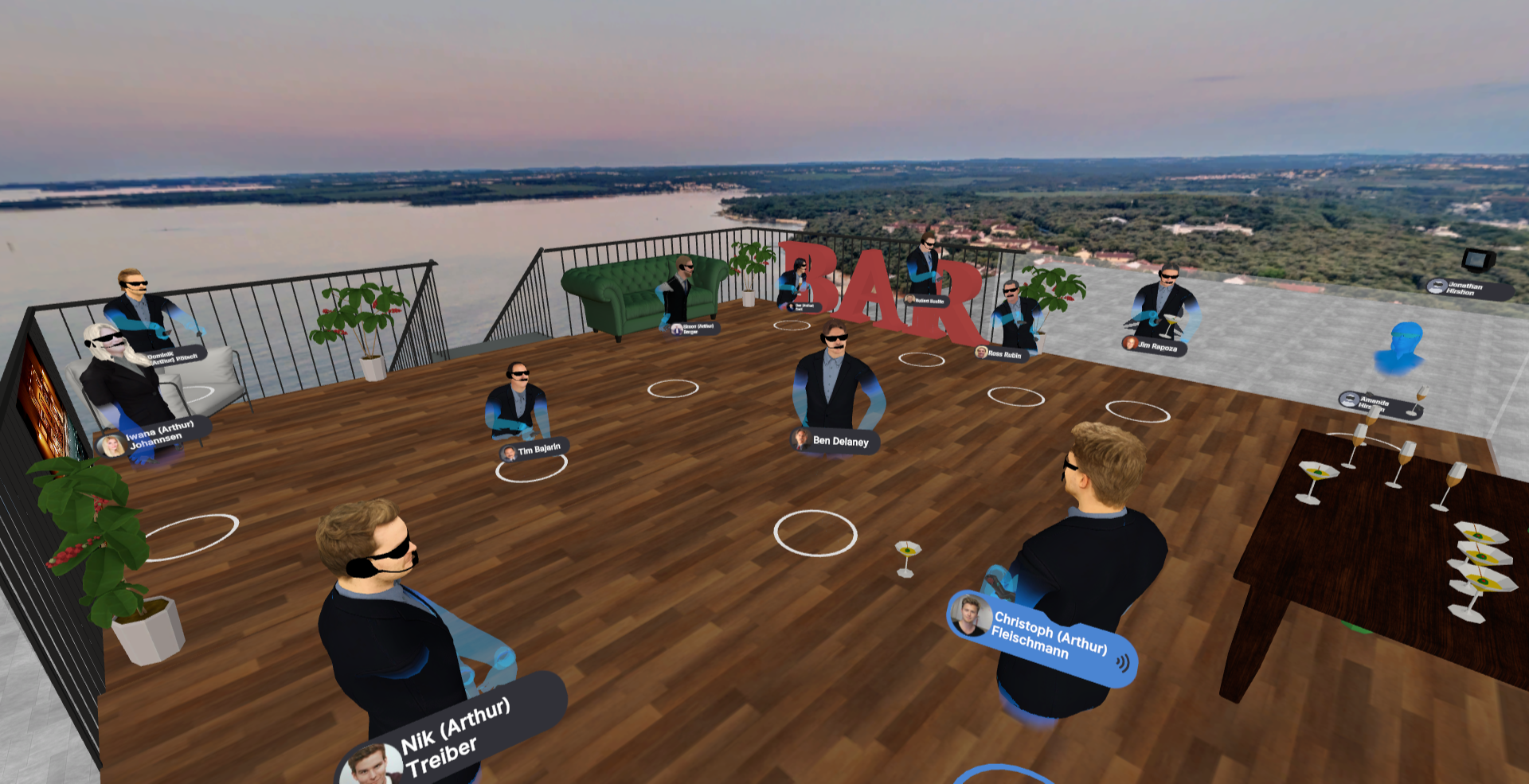 After the briefing on Arthur, we were invited for refreshments. The drinks were plentiful, thought not particularly satisfying.

Arthur’s avatars are much better than some I’ve seen, such as AltSpace’s cartoon representations, or the “Lego man” look of some other systems. As a businessperson, I don’t want to be represented by a silly cartoon. Arthur offers the ability to put your actual face on your avatar, though at the meeting I attended, that function seemed limited to the Arthur team.   Arthur is not offering lip sync or eye movement, but tells me those features are in development. For now, all avatars are wearing sunglasses and a headset with a mic covering the mouth. This actually works well, and it feels natural. A color change of the omnipresent name tag at each avatar’s waist indicated who is speaking at any given moment.

Moving though the space is accomplished by pushing a button on your controller, and there is a trick that allows you to move smoothly instead of hopping. However, the movement controls is not very subtle – I often found myself overshooting my destination, and going back and forth to get where I actually wanted to be. With practice, I expect I would have gotten better at this.

The Arthur team stresses that one of the valuable aspects of their worlds are the persistence of objects in them. If you leave a note on a whiteboard, it will be there when you return. If you rearrange the furniture, it will stay that way. This makes sense in a business-oriented environment, where you would frequently return to the same space for various types of activities. Arthur also offers a note pad where you can type notes. However, this feature is not persistent, and you need to export or save your notes before leaving a session.

Here are a few things I would like to see improved, added or changed in Arthur:

All that said, there is a lot to like in Arthur. First and foremost, it works! I can’t overstate how important that is. In almost every virtual meeting I have participated in, admittedly not a lot, time was wasted as people dealt with technical issues. This is a deal killer. These systems have to “just work,” and be as reliable as a TV set. Developers need to be aware that senior executives will not waste their time on technology that they have to struggle to use.

I like the sound in Arthur, which is better than some other systems in both audio quality and spatialization. I like the look of the avatars, which is business-like, though the loosely connected hand -> arm -> shoulder kinematics leave a bit to be desired. Arthur is also adding 2D support to the system, which will enable computer and mobile device users to participate in meetings.

All in all, it seems to me that the Arthur team, which has already inked deals with a couple of large enterprise clients, understands that meeting the needs of business users, which are quite different in many ways from the requirements of gamers and casual users, will be key to their success. Arthur is still in beta, and that shows. But I believe that Arthur has a chance to make it to the big leagues of xR meeting systems. Keep an eye on this platform. More info: www.arthur.digital. 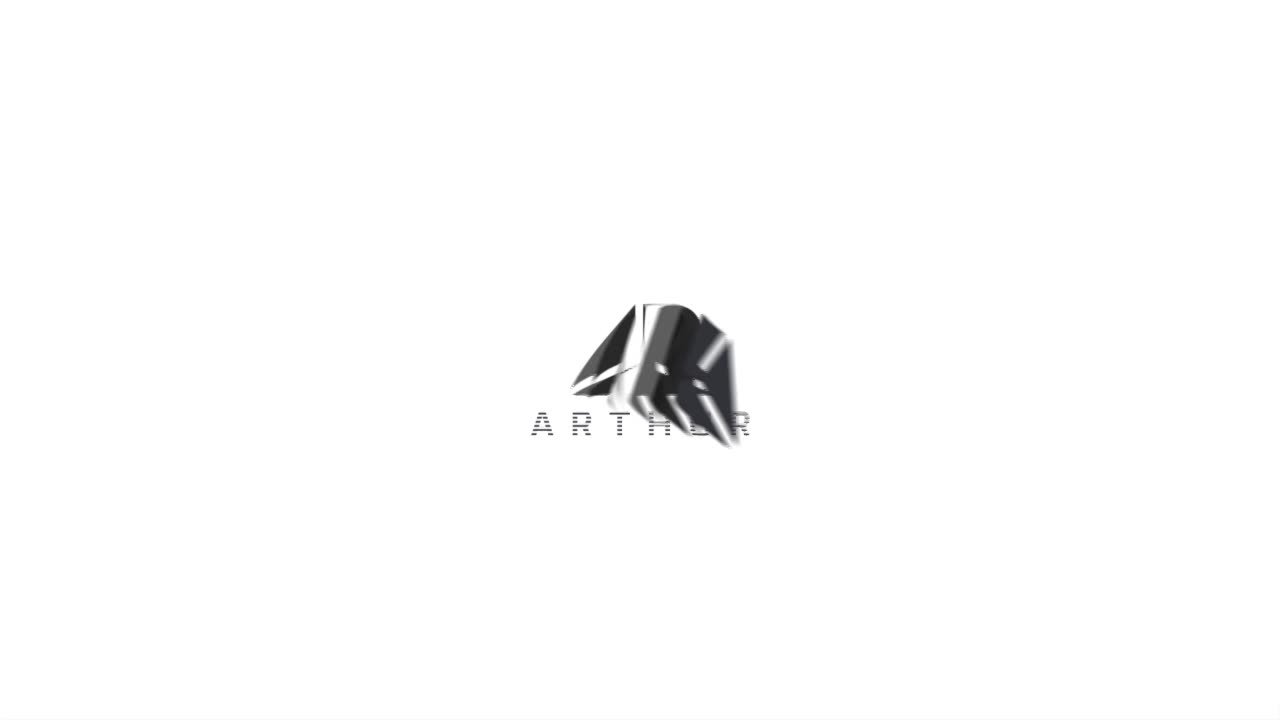 This promotional video shows many of Arthur's features.