IEAnalysis: Big Data will be Big Business in xR

Big Data is a big deal these days. With an ever-growing multitude of devices and websites collecting and collating data ever minute, many organizations are looking for better ways to use this data in business decision-making and planning. Artificial intelligence and machine learning are helping to make sense of the billions of datum being collected. However, sometimes it still takes a human in the loop to find the insights and revelations that the data promises to provide.

Seeing the Information in the Data

Enter visualization. For thousands of years we have found diagrams, charts, pictographs and other visual aids useful in understanding numerical facts. Entire curricula have been developed to study the best ways to present data. A series of books and lectures by statistician Edward Tufte (www.edwardtufte.com) has introduced the concepts of clean presentation of data to thousands of people, whose attention is attracted by what he said “may well be the best statistical graphic ever drawn.” 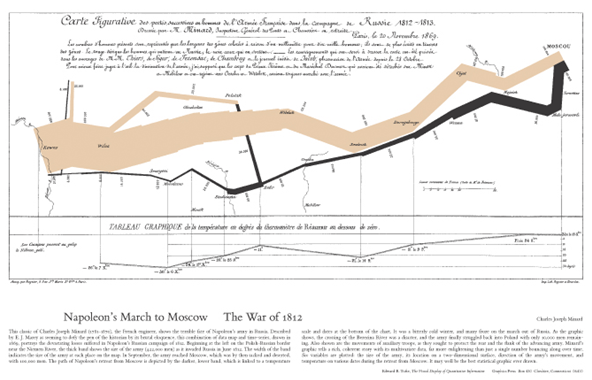 Minard’s map of Napoleon’s march on Moscow, and his retreat. This graphics shows four dimension of information: time, location, troop strength and temperature.Early Attempts to Visualize Data in VR 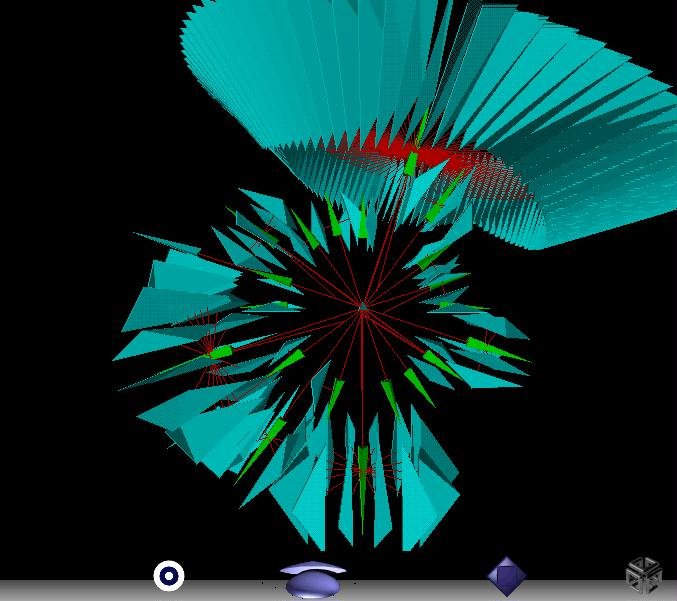 The Hyperbolic Information Visualizer system developed by Xerox PARC in 1992 ran on Silicon Graphics heavy iron. The base price of the hardware was more than a hundred thousand dollars, which put it out of reach for most potential users.e at ImmersivEdge believe data visualization is one of the top three applications of xR, along with healthcare and training. We have been following attempts to use xR for data viz since at least the early 90’s, when an app called Metaphor Mixer provided a way to visualize the price and trading momentum of equities. Developed by a New Jersey company called Maxus Systems, Metaphor Mixer was a good idea at least a decade ahead of its time. Introduced in 1992, the system needed far more power than was available at a cost-effective price. (The system is described in detail in Ben Delaney’s book, Virtual Reality 1.0–the 90’s, page 177.)

Others were also working on data viz in the 90's. Also in 1992, Xerox PARC demoed a few data viz applications intended to be virtual filing systems. They were beautiful and indeed showed thousands of items on a single (VGA!) screen. But as with Metaphor Mixer, the affordable hardware of that time was not up to the challenge.

In 1999, Schlumberger introduced the Geoquest system, which enabled oil field engineers to visualize the results of seismic exploration. Used by teams in a CAVE or dome, this system’s direct descendants are still in use.

Data Viz in the Teens

Now we are seeing data visualization apps that run on common hardware. The exponentially faster processors and GPUs of the teens makes this technology accessible to anyone who needs it. Healthcare, IoT management, weather forecasting, pharmaceutical research, and many other fields are looking at data viz with an immersive front end as business as usual. 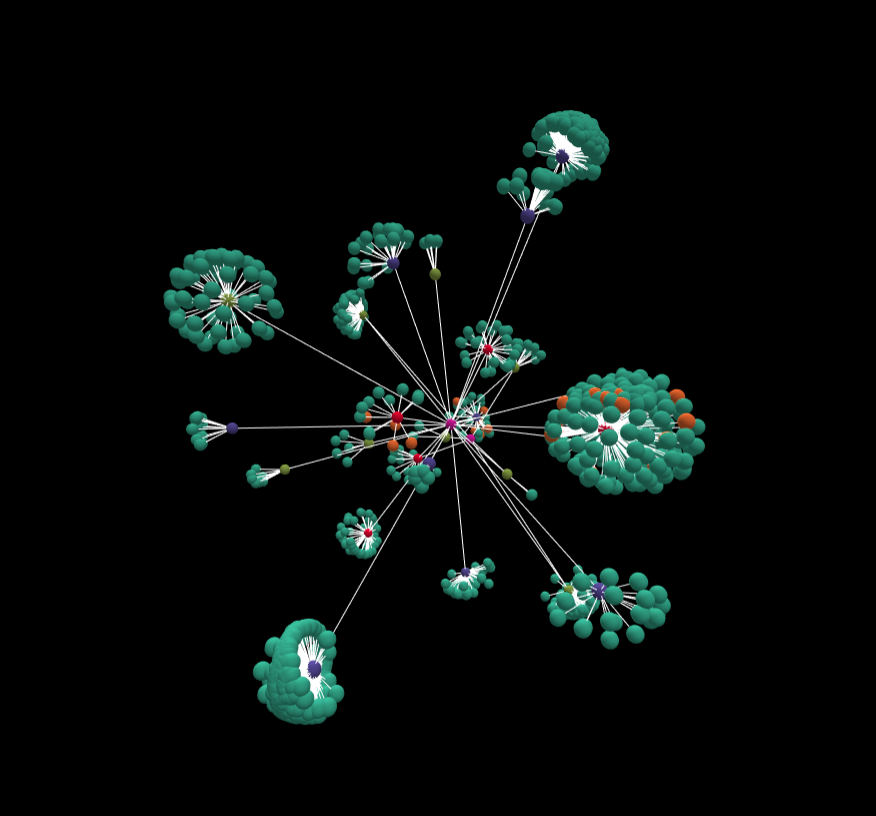 3Data’s network visualization displays multiple dimensions of data network performance, configuration and health in one interactive display.Today’s data viz applications are solutions to serious enterprise and science challenges. 3Data’s Virtual Operations Center (VOC) is a good example of this. Their systems enables monitoring of data networks and network traffic from anywhere with an internet connection. It makes use of IBM’s Watson AI systems to analyse data, and presents graphic representations of the data on any display preferred by the user. Supporting HMDs, CAVE, large flat-screen displays and tradition monitors, 3Data has developed a versatile, affordable system that is being used by dozens of customers.

Mechdyne, best known as a retailer of CAVEs, also offer 3D visualization services. While supporting any viewing systems, they of course recommend CAVEs for their high level of sociability. Among their service offerings are systems for interacting with medical imaging, such as MRIs and CT Scans, in large scale, collaborative environments. These systems, typically large walls, domes, or CAVES, enable medical teams to work together, interacting in a natural way, pointing and gesturing as they would in a traditional conference room. The big difference, and I do mean big, is the ability to see a patient’s anatomy hundreds of times larger than life,. This makes it possible to see tiny details, and enables understanding of pathologies that are difficult to see at real-life scale. Surgical teams plan procedures in these environments, and save time and reduce risk be being able to evaluate their plans visually, from any angle, including from inside organs.

Mechdyne’s large-scale display of a virtual model of a patient’s anatomy enables medical teams to get inside a patient to better understand injuries and pathologies, and plan treatments.

While there are some very good applications of xR for data visualization, the best is yet to come. The serious companies, such as Mechdyne, 3Data, and Schlumberger, are offering proven solutions with real ROI to customers in selected industries. If your company is in one of those industries, you’re in luck. You can start using immersive tech to gain insights today.

However, we do not find any practical, general-purpose applications for immersive data viz. What we do find are a lot of speculative articles and several childish demos made by people who seem to have no idea of how businesses actually use data for decision support. To us, that looks like a major opportunity.

It is also a major challenge. What is missing is the immersive equivalent of the charts feature in Excel. It appears that no one has yet developed a standard set of immersive “charts” that can accept user data and turn out useful visualizations. Think about how those charts in Excel are used. When done well, they make numerical data easy to grasp. A well-designed chart makes a page of obscure numbers into information —a  useful interpretation of the data in which insights can be found. Immersive presentation of 3D charts should offer additional opportunities to understand data and the links and dependencies found in it. They also need to be as easy to use as the charts in Excel.

What is missing is someone like Edward Tufte to tell us what works and what does not in the representation of data in interactive, 3D formats. Just as it took the developers of Excel (and Tableau and other charting programs) some time to arrive at consensus on the best practices in design and presentation of data in 2D charts, it will take time for 3D data visualizers to agree on formats and methods for creating interactive, immersive visualizations of big data sets.

We have no doubt that this consensus is on the horizon. I know that the ACM SIGCHI (Special Interest Group-Computer Human Interface), and many other organizations include people working on this very problem. Those academic scientists need to huddle with business leaders in order to understand the types of data on which business decisions are based. And the gamers who seem to be running many visualization companies today need to apply their obvious talents to address those needs. Whoever brings a reliable product, one that is easy to use, can connect to multiple data sources, and provides immersive displays that make it easier to understand the data, and act on it, will not only make their fortune, but will also be doing a great service to business leaders.