IEAnalysis: Where will Magic Leap turn next?

Today’s article in The Information (https://www.theinformation.com/articles/dented-reality-magic-leap-sees-slow-sales-steep-losses) describes an unravelling at Magic Leap that certainly is not good news for the company. Combined with August’s news that they had collateralized a funding round with their patent portfolio, we regret to inform you that this looks like the beginning of the end, or maybe even the middle of the end, for Magic Leap.

Having raised approximately $2.6 billion, including April’s Series D round of $280 million, it seems that Magic Leap may soon join a long list of over-hyped and under-delivering xR companies stretching back to VPL Research’s stunning bankruptcy in 1992.

It never fails to amaze that otherwise seemingly insane investors throw huge amounts of money at patently ridiculous xR business ideas. In the case of Magic Leap, there were many problems with the company’s plans.

Magic Leap’s website, (July 29, 2014) after refocusing from a software development studio, stated (superimposed over a picture of a whale flying over a beach), “most of us know that a world with dragons and unicorns, elves and fairies is just a better world.” Well, maybe.

Apparently some people felt there was a huge need for more  dragons, unicorns, elves and fairies in the world, because Magic Leap obtained $50 million in their seed and A round funding in 2014. One might think that would buy a lot of mythical creatures. It certainly buys a lot of staffing. By November of 2014, Magic Leaps was advertising 69 open positions on its website. Most of these jobs were for hardware and software engineering. A half dozen were for administrative posts. And five were for game developers. Therein, I believe, lay the problem. Magic Leap sowed the seed of its own demise in 2014. 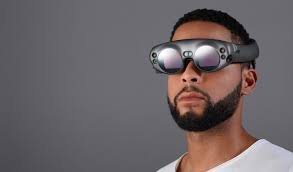 Magic Leap kept the world in suspense for years, until finally releasing the Magic Leap 1 on August 8th, 2018. The design was startling – a steam-punk vision of tight-fitting goggles that would not have seemed out of place aboard Jules Verne’s Nautilus. (A leather helmet was not included.) Surrounding the see-through displays were a flock of sensors. OK, a lot of new inventions look odd at first. But the technical specs left a lot to be desired.

The Magic Leap 1 package included the HMD and a hand-held controller, as well the Lightpack, an external “portable processing powerhouse that clips onto the user’s pocket for total freedom of movement. With a powerful integrated GPU and CPU generating high-fidelity, quality graphics…”. The package was priced at $2295.

Most user felt that the CPU, tracking and sensor array were adequate, but there were many complaints about the visual system. Providing a field of view (FOV) of 40 degrees horizontal, 30 degrees vertical and 50 degrees diagonal in a 4:3 aspect ratio left users wanting more. And by the way, the system did not accommodate eyeglasses, instead offering prescription lens inserts at additional cost.

Most noteworthy on that list is the complete lack of any software remotely related to enterprise use. Sure, way back in 2018 it may not have been clear what enterprise users would be looking for, but companies like Daqri, Vuzix, and Microsoft seemed to have found enterprise markets. But Magic Leap seems to have chosen to take a very different path. They gave every indication that they saw their product as a gaming accessory. However, no one there seems to have noticed how few gaming accessories have four-figure price tags.

Magic Leap built a legend on flim-flammery. They teased the public about what they were doing for years. Their most notorious demo, a whale breaching out of the floor of a gym, to the cheers of the surrounding crowd, none of whom were wearing head-mounted displays of any type, was patently fake. When they finally released their product, it underperformed the expectations they themselves had set for it.

While we hate to see any xR company go down the drain, and Magic Leap has not folded yet, we see this as yet another precautionary tale for xR developers and investors. And if I may quickly throw in a brief plug, this is why ImmersivEdge Advisors was created, to help well-intentioned people avoid similar pitfalls.

Here are a few of the lessons learned about Magic Leap and other over-hyped xR companies:

I hope Magic Leap can pull their bacon out of this fire. Even more, I hope developers and investors realize that the next hot thing may be a lot cooler than it looks.