We Get Into the HoloLens2

Recently I attended a meetup in San Francisco at the Microsoft Reactor facility. The program for the evening was an in-depth discussion of the new HoloLens 2 headset that Microsoft has just released. I was excited to attend this meeting because while I had heard a lot about HoloLens 2, this was my first opportunity to actually see and experience the new device. I was not disappointed. 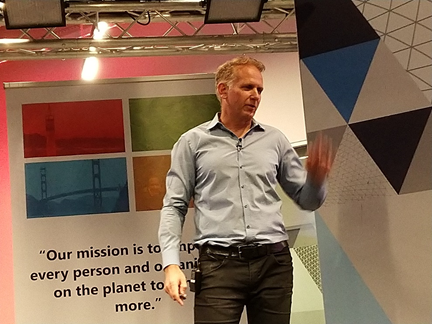 Rune Jensen explained how the HoloLens 2 was improved after feedback on the first model.This presentation was a field day for my inner geek. The comprehensive presentation was made by Rune Jensen, Microsoft’s General Manager for HoloLens. After telling us that he was going to give us the opportunity to “crawl around inside the device,” he started with a slick video that provided a glossy overview for the HoloLens. You can see it here: https://www.microsoft.com/en-us/hololens/hardware#. The conversation quickly got much deeper, literally looking into the construction design constraints and choices and the performance enhancements that HoloLens 2 provides. 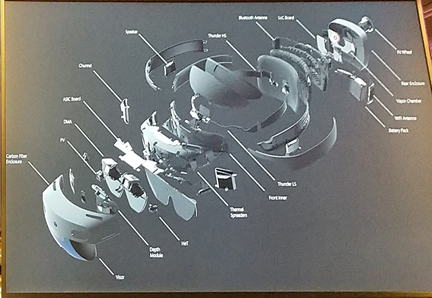 The presentation really got deeply into HoloLens2.

Unlike the HoloLens 1, the HoloLens 2 uses laser projectors and a MEMS scanner which presents the image through transparent waveguides in front of the user’s eyes. This system provides a bright, sharp image with resolution of 1968 x 1280 per eye. The field of view is nearly twice that of the previous system, at 43° x 28°, 45 pixels per degree, per eye. 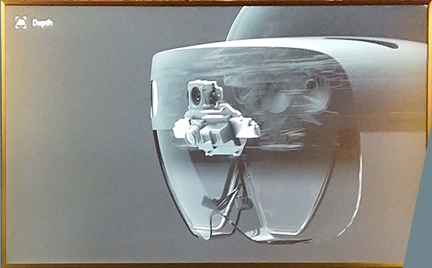 The system uses an array of cameras and other sensors to enable environmental awareness. Four cameras on the visor are used for tracking and object recognition, while an additional front-facing camera can record video or still pictures.

The depth cameras measure time-of-flight of one tracking laser’s signal to determine distance. Another laser is used for tracking both hands. A surface support system recognizes surfaces while a semantic labeling system recognizes objects detected in the field of view. Other sensors include an accelerometer, gyroscope and a magnetometer.

A “Holographic Processing Unit” connects all the sensors to the central processor and manages display registration when the head tilts or head position otherwise changes.

On the inside of the display, two IR cameras mounted on the nose bridge provide eye tracking. The cameras detect the reflection off the user’s eyes of 12 LEDs mounted around the perimeter of each waveguide. The system also provides iris recognition to provide biometric security.

The HoloLens 2 software is able to capture both the external view and the CGI holograms in one image. This will certainly be useful to demonstrations and training application users.

A set of speakers mounted on the head strap provide specialized audio, which can accommodate 32 audio sources, or more.

The untethered HoloLens 2 device created a number of design challenges that Microsoft has addressed with grace and inspiration. The placement of the displays supports eyeglass wearers and is easily adjusted. The flip-up visor will make using the system more convenient.

While a HoloLens 2 only weighs about an ounce less than the HoloLens 1, coming in at 565 grams, it feels much lighter. This is because the center of gravity on the system was moved rearward about 33mm from the previous model, making it sit far more comfortably on the head. When I wore the HoloLens 1, I was frequently pushing the front up to keep the displays in front of my eyes. That issue has disappeared with the new model. Microsoft provides an overhead strap with the HoloLens, but at the demo the other night those straps were not on any of the units, and were not missed. The head strap features a large tensioning wheel in the back that enables one to change the tightness of the strap easily. There is also a brow pad that supports the weight in the front. Positioning the unit so that the displays were properly in front of the eyes was no problem and the unit stayed in place while I was wearing it and moving around. 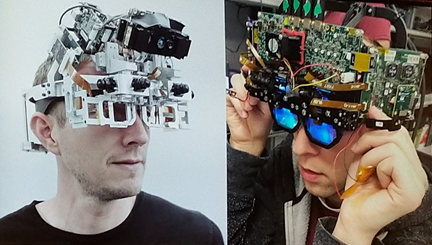 A couple of early test rigs give a sense of the effort Microsoft made to ensure that HoloLens 2 would be a major improvement over the previous model.

Jensen mentioned that Microsoft made a major effort to ensure the comfort of the system for long usage periods. They tried hundreds of designs for the brow pad, which supports the system’s weight in front, and they had scanned more than a thousand heads in order to create a mounting system that would be comfortable for a wide variety of heads of various sizes and shapes.

An important part of the ergonomic tuning was balancing the system’s weight fore and aft. The front enclosure, containing the displays and tracking systems, and the rear enclosure, where much of the computing hardware is placed, are both made of carbon fiber. Microsoft chose this material not just for its light weight and strength, but also for its thermal dispersion characteristics. In the rear enclosure is a system called a “vapor chamber” which dissipates the heat from the SOC and other hardware. In the front enclosure are two channels that Microsoft calls “chunnels,” which disperse heat from the displays and other hardware in the front of the system. When I wore the system for the demo, it had been on for at least an hour. There was no noticeable heat from it and it was quite comfortable. 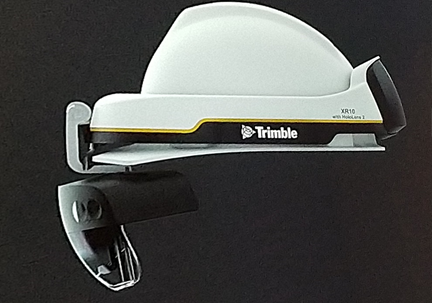 Microsoft also displayed a custom HoloLens 2 version being sold by Trimble under the label EXAR 10, which we featured in a blog post several weeks ago (https://www.immersivedge.com/news-views/trimble-announces-availability-of-the-xr10-with-hololens-2). This system mounts the HoloLens 2 on a hard hat and is a sold by Trimble for use in industrial environments.

The HoloLens 2 is available now with single units priced at $3,500. Jensen mentioned that there is a waiting list, so get your order in soon and be prepared to wait a while to get your unit.